Ed,(Born December 5, 1993) is a character and the main protagonist in the Ed, Edd n Eddy series on Cartoon Network. His favorite foods are Buttered toast, Gravy and Jawbreakers, and he is allergic to eels, rabbits, guinea pigs and Butterscotch Pudding.

This page is for Ed from ANY person's continity! If you are looking for a full article from our canon counter part, click here.

Ed seen on the major 2014 Cover art of Ed Theft Auto on the left of Continental Harrison... 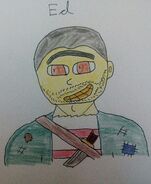 Ed in the apocalypse, by Gunnar Iron
Add a photo to this gallery
Retrieved from "https://edfanon.fandom.com/wiki/Ed?oldid=62888"
Community content is available under CC-BY-SA unless otherwise noted.